My life as a gearhead part VII - adult on 4 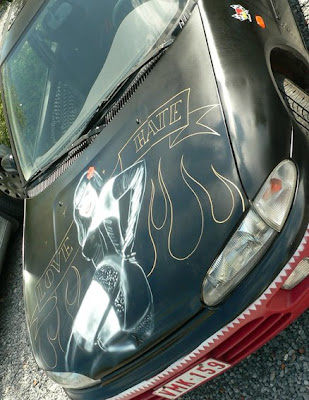 another winter, another car. I wanted something simple, solid, something that didn't have the "look at me I'm rich" kind of personnality my previous cars had (corolla exluded) something that wouldn't cost me an arm and a leg in taxes and gas. Something I could park in the xity I live. something... ugh!... a car...
so I ebayed a lot for a few month and found a 1992 mitsubishi colt 1.6.
the 1.6 would mean reasonnable taxes, the mitsubishi would mean easy to find parts, and it came as a surprise. the front seats were about as comfy as the buick's, the rear seats had more space than the monzta had, it burns around 10 liters per 100km in town were the buick would use more than 15. (yeah, I used to say 12 but it was more like 15L/100)
can't find the exatc spec, but it's about 920KG/113HP
that's a 1/8.14 power to weight ratio. MUCH more than the 2.8 buick or the 2.5 monzta

everytime I floor the pedal, the cheap chino-korean tyres skeek in agony.
I did not test it's top speed as it's higly unstable above 140 km/h
that isn't really an issue as my average is 30km/h in the city.
no air-co, no abs, no computer, a cassette player and a sunroof.

I covered the interior with fake muppet fur, painted the birght red in mat black with a poorly made betty page on the hood and a few pinstripped flames. the "Mr horsepower" stikers are the most expensive thing on that car.
there always is a slight moment of amazment when I get in an intersection, people just gaze in horror and shock, and I take the opportunitty to cross the intersection.
and if someone wants to play, blamoh, it's a regular sleeper with more than decent accellerations.

to my great great surprise (/dissapointment?) it just passed the technical inspection (I didn't even check the headlight adjustment, just deflated the tyre to cover the 15 years old suspensions), so I guess I'm stuck in the little black thing for another year.
à juin 18, 2008