my life as a gearhead part I (coming out)

I found some old pictures while emptying boxes in my new office. made me think...

I was raised on the plastic seats of a vw411, then in a 1978 first generation passat, then I learned to drive on my father's 1984 vw passat hachtback (second generation).

When my father died, we kept the car and I drove it untill it died too. it was a cool car for a teenager, comfy, no power steering, no abs, no cassette player, no power window, no nothing. dented and reasonnably fast for 1989.
I sold it too cheap (6000 Bfr) and convinced my mom that what she needed was a used 1988 1300cc corolla hachtback.
aka known as "the worst car I ever drove".
funny enough the internet gives the exact same data as the vw:

it was ugly, slow, uncomfortable and smelled dog poop/vomit. a friend's dog got sick in at the back and I never could get the sticky stuff out of the carpet. I just had to roll the windows down when the temp would go above 15°C. no power window or nothing, BUT power steering.

the tacho topped at 100mph - 140 km/h so in the beginning, I took the habit to just stick the needle at the end of the tacho. at the end, tho, it had a hard time getting there.
here is a picture of the bike after a cutom paint job that turned out wrong but I was so tired to wait I got it back together like that. 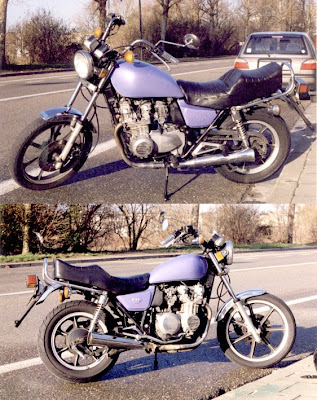 The LTD was a gpz engine in a custom outfit, a 6 speed fire spitting in disco dress, it need to be kept high around (or above) the red zone of the counter, it was pure fire, not really fast, certainly not efficiant, but a ball of fire in sexy dress. and it was all I could afford at that time while being chopper minded. my ideal bike at that time was a 1400cc intruder.

power to weight ratio : 1/4.2. yes, that is about 3 times more efficient than the car I owned before.
I only had ridden a friend's cx500custom before I bought it (he could let me ride his bike after his dog had puke at the back of my corolla) so I only survived the kawazombie by accident.

I rode the little devil for 4 years. the counter cable kept breaking so I'm not sure how much km I put it on. probably around 50.000 km. by that time, the bike was 14years old, shocks and exhaust were dead, it would just spit out oil by every seal and the only way I could get it running to go to work at 5 in the morning would be to open the saddle, spray a large amount of start pilot, then run down the street, jump on the saddle and kick down a gear.
then I quit my job as a truck driver to take a part time job and spend the rest of the time working on my art. that turned out bad of course. One day I just couldn't afford to pay for insurrance or even for maintenance and decided to get rid of it.
now really if it had been a pet, I would have had it sedated. the poor thing just diserved some peace. I refused to sell it to a few nice people then had to give it away to some bloke who wanted something to work on. the bike probably kept him busy until now and he probably still hates me. it died at the end of the street when he asked to try it, but still he wanted to buy it, so.. he got what he diserved.
eh... what should I do?... drown the bike in the river and declare it stolen ?

anyway. as I am really smart I didn't sell it/quit the insurance fast enough and I was stuck for another year of payment. might aswell keep the bike. but too late. so I swore I would NOT buy another bike within a year and would quit the insurance company and get my money back after a year.
that was 1999. worst year of my life. stuck in a dog poo stincking corrolla with no power. took 3 jobs to put money aside.