my life as a gearhead part III - MONZtA

in the meantime, three jobs began to pay. actually I had to give up one. that only left me with about 35 hours of delivery and 35 hours of drawing a week.
hey wait, that's 70 hours a week? hmm ok.
So I began to think that maybe this was it, my big chance to at last buy me some decent wheel for the winter and snow riding.
I started to look for some classic euro coupe, gave up on a 1976 ford M26 because of all the chrome involved and found the monzta.
It was cheap but the owner probably took pity on me and told me the overdrive was dead, making any trip above 100km/h a torture. I found a gearbox in a junkyard, he offered to have it installed by his mechanic and cut the price by half and I left with the really cheap monzta. now if you live in the land of the free, do not mistake this with a chevy monza. the OPEL (part of GM) monza was the equivalent of an euro dodge charger. the 3.0 GSE would be the R/T, I owned a 2.5i. not collector, but a mean machine. not of good taste in any way, but the sound of the 6cyl was enough to scare people away. 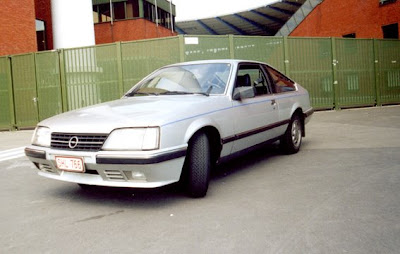 it was my first automatic car and I will always miss it.

the only problem was I had try that green muthaf*cking bike my boss let me ride and ... I wanted one.
I clearly remember the day one of my co-worker (oh yes, I had a new job by that time) threw around a free news paper as a joke while I was scanning some bike picture for the magazine and I said "thanks, let's see if there's a cheap zrx in it!" and there was one. so I tried to get rid of the giant german coupe (after my brother used it for a few month and crashed it) and in the end, I gave it for free to some guy in the south of france who always dreamed he had one. he took a train here then rode the 12 hours trip home without any problem. never heard of the monzta again, but I do miss the big fat german bitch.
next on blogspot: "king rex"
à juin 03, 2008