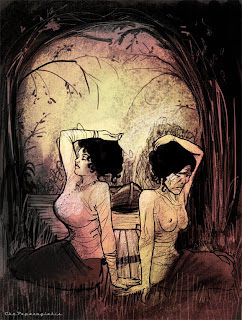 In Dutch painting, a vanity is a still life painting depicting life on earth as vain. Vain -> Vanity / Vanitas.
In french, to describe a still life, we use the words "Nature morte". or "dead nature".

In the arts, vanitas is a type of symbolic work of art especially associated with Northern European still life painting in Flanders and the Netherlands in the 16th and 17th centuries, though also common in other places and periods. The word is Latin, meaning "emptiness" and loosely translated corresponds to the meaninglessness of earthly life and the transient nature of vanity. Ecclesiastes 1:2 from the Bible is often quoted in conjunction with this term. The Vulgate (Latin translation of the Bible) renders the verse as Vanitas vanitatum omnia vanitas. The verse is translated as Vanity of vanities; all is vanity by the King James Version of the Bible, and Utterly meaningless! Everything is meaningless by the New International Version of the Bible.

Vanitas themes were common in medieval funerary art, with most surviving examples in sculpture. By the 15th century these could be extremely morbid and explicit, reflecting an increased obsession with death and decay also seen in the Ars moriendi, Danse Macabre and the overlapping motif of the Memento mori. From the Renaissance such motifs gradually became more indirect, and as the still-life genre became popular, found a home there. Paintings executed in the vanitas style are meant as a reminder of the transience of life, the futility of pleasure, and the certainty of death. They also provided a moral justification for many paintings of attractive objects.

Common vanitas symbols include skulls, which are a reminder of the certainty of death; rotten fruit, which symbolizes decay like ageing; bubbles, which symbolize the brevity of life and suddenness of death; smoke, watches, and hourglasses, which symbolize the brevity of life; and musical instruments, which symbolize brevity and the ephemeral nature of life. Fruit, flowers and butterflies can be interpreted in the same way, and a peeled lemon, as well as accompanying seafood was, like life, attractive to look at, but bitter to taste. There is debate among art historians as to how much, and how seriously, the vanitas theme is implied in still lifes without explicit imagery such as a skull. As in much moralistic genre painting, the enjoyment evoked by the sensuous depiction of the subject is in a certain conflict with the moralistic message.