Today is a beautifull day. meteo-wize anyway.
So I drove the car to work. don't ask.
It struck me to see all those guyz in big company car stuck up the butt of my ratmobile, the sun allowed to clearly see their faces in my mirror. well… their parody of faces.
Poor creatures. who do those people thing they are ?! each salaryman that finally passed me with his mummy's face put a smile on mine and I turned my head to see them pass.
One had the expression of steven seagall but the sun glasses of lolita. I swear.
They all stood oblique in their big airconditionned black company cars with their sunglasses like statues, like anything but a human being. "get out of my way, your blocking my heroïc run towards socio economical stereotypes and the achievment of my carreer as a persecutor."

Of course, they NEED to be stuck up the butt of another car like they had a priority pass, because, eh, I guess being the north european sales representative executive for the second larger aluminium ladder company probably gives you certain rights. or maybe they thinks they look like bruce willis.
Eh, DUDE, big news, bruce willis probably doesn't drive a leased volvo at 8 in the morning.
Or maybe they just need to hugh someone, in a very twisted mannish manner.


Then there is the ex prettiest girl of the office, who notices that you looked at her in the mirror, so she looks into hers, not sure hos to react. playing with her hairs to look sexy, just in case, but locking the doors, just in case.

I had a lot of fun. once. ok. I'll ride the bike for the rest of the week, then … ROADTRIP !!
Maybe my job doesn't stink so much in the end. 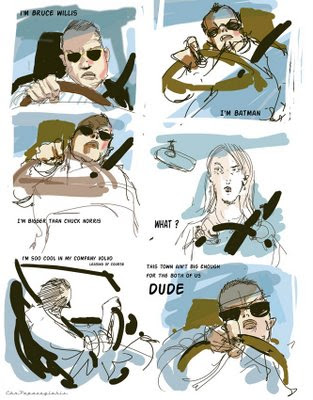